Russia has demanded Nato withdraw a 2008 pledge to admit Ukraine and Georgia as part of future security talks that Washington hopes will deter Moscow from invading its southern neighbour.

The Russian foreign ministry on Friday published a list of proposed agreements that offer the most detailed insight so far into the “red lines” Vladimir Putin wants to form the basis of a new European security order.

US president Joe Biden agreed to discuss Putin’s grievances with the transatlantic military alliance in the company of a group of Nato members following a video call between the two leaders on Tuesday.

The US has warned allies that Putin has massed as many as 175,000 troops on Ukraine’s northern, eastern, and southern border in preparation for a possible invasion that officials say could be the bloodiest conflict in Europe since the second world war.

Russia’s foreign ministry said Moscow’s relations with the west were at a “critical juncture”, blaming the US and EU for holding “provocative” military drills near the Russian border and supplying Ukraine’s army with equipment.

It also accused the west of “dragging Ukraine into Nato”, which it said could result in the deployment of missile systems and troops that could be used to attack Russia from Ukraine.

Volodymyr Zelensky, Ukraine’s president, has made securing an action plan for Nato membership a cornerstone of his foreign policy.

Nato’s then-secretary general said in 2008 that Ukraine and Georgia would one day become members but the alliance has never specified a timeline and has not entered either country into its formal process for membership.

The Russian foreign ministry said it wanted legal guarantees that the pledge was no longer in force, as well as other agreements that Nato would not deploy weaponry to countries bordering Russia, hold military drills beyond a certain distance from Russia, and setting maximum approach distances for ships in the Baltic and Black seas.

It also called on the US to readopt the Intermediate Nuclear Forces treaty, a Cold War agreement banning land-based missiles with a range of 500km-5,500km from which the Trump administration withdrew in 2019.

Jen Psaki, the White House press secretary, on Friday dismissed Putin’s demands as unsurprising. “It’s the same list of demands that the Russians have been advocating for and voicing for several months, if not years, and that is their prerogative,” she said.

Jake Sullivan, national security adviser, said Biden “clearly and directly . . . made no such commitments or concessions” regarding excluding Ukraine from Nato in his discussion earlier this week with Putin.

“He stands by the proposition that countries should be able to freely choose who they associate with,” Sullivan said.

Senior US officials have also said Biden has made “very clear” that one nation cannot force another nation to change its border.

“[One] nation cannot tell another to change its politics, and nations can’t tell others who they can work with,” a senior administration official told reporters on Thursday, after Biden spoke to Zelensky and, separately, nine Nato allies along its eastern flank.

The US administration has said it is “always” prepared to talk about the full set of security issues with Russia, however, and cited a large number of formats that exist to be able to do that. 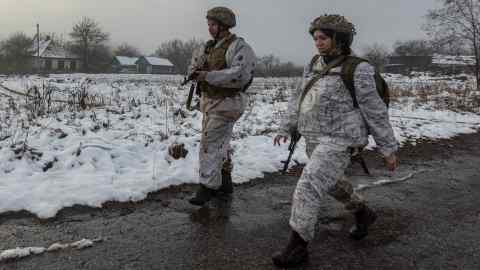 A Nato spokesperson referred to earlier comments by its secretary-general Jens Stoltenberg: “We stand by our decisions and nothing has changed when it comes to Nato’s approach to Ukraine’s membership,” the alliance’s head said in Paris on Friday. “It is for Ukraine to decide its own path, to decide whether it wants to aspire for membership or not . . . And then this for the 30 Allies to decide when Ukraine is ready to join the Alliance. No one else.”

Russian deputy foreign minister Sergei Ryabkov told a news conference on Friday that Moscow did not expect the US to agree to its demands immediately, but warned of consequences if they were ignored.

“If our opponents on the other side — first and foremost the US, but also other countries, allies, the so-called allies of the US — refuse, try to torpedo the whole thing, they will inevitably encounter a further worsening of their own security situation,” Ryabkov said.

Russia and the US will discuss some of the proposals as part of an ongoing strategic security dialogue about nuclear weapons, Ryabkov said.

“We need to avoid a new missile crisis in Europe before it’s too late,” he added.

Previous Peloton really wants you to know that what happened to Big isn’t because of its bike
Next At democracy summit, a move to confront repressive nations’ ‘misuse’ of tech